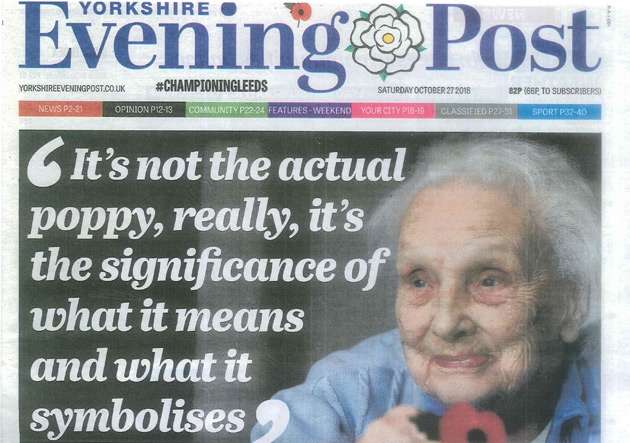 Winnie, now 97, grew up in Methley, Leeds. During the Second World War she was a radio operator in the Women's Auxiliary Air Force (WAAF), stationed at RAF Ouston in Northumberland.

The Yorkshire Evening Post interviewed Winnie for the launch of the appeal. Winnie told the YEP: “I think the Poppy Appeal is very important, in as much as we must not let [events like the First World War and Second World War] happen again. It’s also important that we still remember and always remember the people who gave their lives.

“It’s not the actual poppy, really, it’s the significance of what it means and what it symbolises.”

In the interview Winnie also described one of the times she helped a stricken pilot reach safety. She added: “When I look back on what I did during the war, it’s with gratitude. I am proud of what I did and that I was able to do something.”

At the launch Winnie was presented with the city’s first poppy of the year by the Lord Mayor of Leeds, Councillor Graham Latty. Liz Green, from BBC Radio Leeds, acted as host for the event which also included an act of remembrance and two minute silence, music from acoustic group Keystone and the Athill Trefoil Guild Ukulele Band. Chairman of the Leeds branch of the Royal British Legion Jeff Gantschuk addressed guests and standard bearers were on parade.

The full video interview with Winnie and coverage of the launch of the Leeds Poppy Appeal is available on the Yorkshire Evening Post website.
Back to latest news